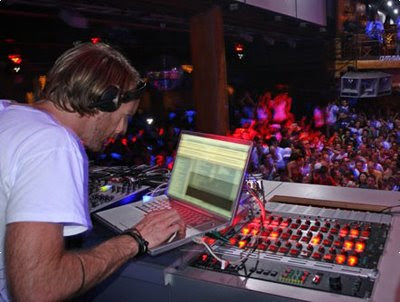 For those DJs like my self that use traktor pro and are connected to their fans on twitter here is some info that might make you smile! SUPER BITCHIN IDEA!

Pioneering techno DJ Richie Hawtin has announced the development of a new Twitter application that enables him to broadcast his Traktor tracklists in real time over the network.

The custom Twitter application was developed in-house by Richie Hawtin’s label Minus, and it works by uploading song metadata through Traktor Pro’s inbuilt broadcasting functionality.

Track details are automatically posted to Richie Hawtin’s Twitter account every 30 seconds (you can already see Traktor tracklist updates on his Twitter), giving anyone access to the tracklist of his performance, and providing exposure to the artists and labels whose music is being played.

The Twitter app is so advanced that it inspired Native Instruments to add the functionality themselves to version 1.2 of Traktor Pro which will be released as a free update.

That means that soon everyone will be able to tweet their tracklists via Traktor. Awesome!

I would love to hear what you all think of this new and exciting development, and what it means for our scene.

hah wow that would be soo sick! i use to think twitter was a waste of time and that facebook was way better but to use it like this would be amazing!